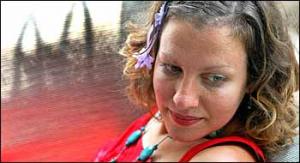 THIS STORY HAS BEEN FORMATTED FOR EASY PRINTING

This year's Newport Folk Festival lineup was completely booked. At least that's what producer Robert Jones thought, until he heard Somerville songwriter Antje Duvekot . It was June, and Jones says he had one of his rare ``rings true" moments. It was the same feeling he had the first time he heard Bob Dylan, Doc Watson, Alison Krauss , Ellis Paul , and Dar Williams .

``I find it very difficult to explain what it is -- you just hear it," Jones says of such revelatory musical moments. ``The music just swings right. The voice, the style, the melodies, the content; it all comes together. Duvekot writes songs that are very personal, but they're much more than somebody's diary."

Jones immediately added the singer-songwriter to this weekend's Newport bill.

Duvekot (pronounced DOO-va-kot) has gotten hotter faster than any local songwriter in recent memory. In July, she won the New Folk Award at the Kerrville Folk Festival in Texas, just as Nanci Griffith and Steve Earle did. Her new CD, ``Big Dream Boulevard," has been No. 1 on the Boston folk radio station WUMB-FM (91.9) for the past month. And just this week, she was selected to showcase at the prestigious international Folk Alliance conference in Memphis.

It's all a little overwhelming for the German-born songwriter, who moved to this country when she was 14. In fact, her first reaction to all the Antje-mania was a severe writer's block, which only lifted a couple of weeks ago.

``It all feels kind of surreal, hard to trust," Duvekot says in her soft, sonorous voice. ``I guess as an artist, I'm just perpetually insecure. All the things I've worked for are coming true. And it's just what I'd hoped, which is that my songs would connect with people. That's wonderful, because it makes me feel purposeful."

Most rising stars would be wary about admitting to insecurities, but Duvekot, 31, is hopelessly addicted to telling the truth about herself. It is central to the allure of her closely observed songs. She believes in the redemptive power of sharing secrets, especially the ones we try the hardest to hide.

In the shattering ``Judas," she probes the ravages of abuse: ``Last night, Judas's father threw his son against the wall/ That's how you learn to be invisible."

Dave Marsh, rock critic and former editor of Rolling Stone, is another Duvekot champion. He currently edits Rock and Rap Confidential and hosts his own show on Sirius satellite radio.

``As far as I can tell, she's the whole package," Marsh says. ``I've had this reaction once in the past 10 years, and that was the first time I heard Patty Griffin. And the reasons are very, very similar: that package of a terrific writer and singer, with the instincts to do things right, over and over and over."

He likes every song on Duvekot's CD, but especially ``Judas" and ``Jerusalem," in which she laments the plight of the eternally war-torn city: ``Your God's armies are marching on heaven . . . casting poisonous seeds for your children to reap."

Duvekot comes by her deeply felt empathy in hard ways. She was a painfully shy adolescent when she moved to this country, barely able to speak English. Her mother and stepfather were strict and controlling, so much so that she was forced to hide her growing need for music, the only place she could express her feelings. For years, she had to hide in closets to sing, in barely audible whispers, about her crushing isolation and pain.

That remains in her music, transformed into a gripping style: stark guitar parts, and hushed vocals trembling with believable emotion. Her songs still feel like secrets: tender, wounded confidences she is warily sharing with us.

``If you go through hard times, they say it makes you more able to not be selfish, and to see how it is for other people," she says. ``I think those years made me more thoughtful about suffering in general, and gave me a desire to address it, not just pretend it's not there."

Her limited grasp of English back then forced her to think of words in terms of their context, meter, weight, and color -- the tools of the poet. The result is a stunningly original lyrical palette.

``Because of my inability to put down analytical, rational trains of thought and follow grammatical rules," she says, ``my lyrics came from a more emotional place. They aren't as influenced by the outside as the inside."

In ``Rudderless," she describes a dangerous love: ``We're a paper fleet in an arctic freeze/ On the skin of an endless open sea." In the resilient ``Dandelion," she turns the lonely ache of the wallflower into a source of strength and pride: ``You were looking for a tea light/ And I will always be/ A forest fire."

Duvekot admits that she wrote ``Dandelion" in part because a song like that would have helped her through her own wallflower days. She thinks about those things when she writes because she believes that discovering the honest, intimate folk songs of John Gorka, Ani DiFranco, Ellis Paul, and Dar Williams saved her life. Now she yearns to offer that kind of lifeline to all the dandelions and Judases out there, bullied and belittled, crouched in the darkened corners of our careless, self-involved culture.

In ``South," she sings, ``There are jagged shards of glass out there/ And the ones who wear the shoes don't seem to give a damn."

``Intimate songs by people like Dar Williams and Ani DiFranco ," she says, ``gave me a certain liberty to think I could share my feelings, and that maybe somebody else would care. Because I know I cared. Those songs helped me a lot. So now, I'll think that this is pain I've felt, so I'm going to write it down and get it off my chest. Because I'll bet somebody else is feeling the exact same pain and will find some solace in that."